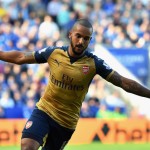 7′ – CAZORLA CHANCE! Arsenal have an attack down the left, the ball falls to Cazorla 12 yards out and his low effort is cleared off the line by Huth.

10’ – WOODWORK! Schlupp’s deflected effort from outside the post is beaten away by Cech. The ball comes out to Vardy who strikes the post with another deflected shot off Mertesacker from 20 yards.

13’ – GOAL! Vardy with acres of space down the left and he drives it into the corner, great finish from a tight angle.

16’ – WALCOTT EFFORT: Great through ball from Sanchez to Walcott and from a tight angle he forces Schmeichel into a good save.

18’ – WOODWORK! Vardy heads the ball onto the crossbar after a brilliant ball to the far post.

18’ – GOAL! Leicester 1-1 Arsenal. Straight at the other end, Cazorla’s through ball finds Walcott who is through on goal and strokes the ball into the bottom corner to make it 1-1.

33’ – GOAL! Leicester 1-2 Arsenal. Sanchez has broken his duck this season with a tap in from six yards after Walcott’s effort is blocked by De Laet.

84’ – CECH SAVE! Cech with another top class stop to parry Mahrez’s low drive from a tight angle.