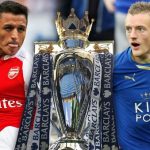 Leicester City are on a 19-match winless run against Arsenal in the Premier League (D6, L13) and lost both games last season.

Leicester’s only victory in the last 31 league and cup meetings came at home in the first Premier League fixture between the sides in November 1994.

Arsenal have only failed to score in one of the 27 most recent league encounters, when the sides drew 0-0 in January 2001.

Leicester City are the first reigning top-flight champions to lose their opening game since Arsenal in 1989. No defending champion has begun the following season with successive defeats since Aston Villa in 1981.

Leicester have played four Premier League games without Robert Huth in their starting XI over the last year and have failed to keep a clean sheet in any of them.

Claudio Ranieri’s next Premier League win will be his 100th in the competition.

The Gunners conceded four goals at home in the league last weekend for the first time since May 2009, and only the third time in total.