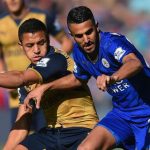 Leicester are on a 19-game winless run against Arsenal in the Premier League (D6 L13) and lost both games last season.

Claudio Ranieri will be looking for his 100th Premier League win as a manager in this game.