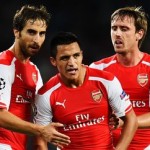 Leicester won their first Premier League home game against Arsenal (2-1 in November 1994) but none of the subsequent seven games saw them claim three points.

The last time Arsenal played Leicester was the 38th and final game of the unbeaten 2003-04 Premier League campaign.

Leicester’s players to have featured so far have a combined total of 550 Premier League appearances, fewer than any other team this season.

Arsenal’s Alexis Sanchez has conceded more fouls (7) without getting booked than any other Premier League player this season.

Arsenal have only won three of their last nine Premier League away games (D2 L4).

Injured hitman Olivier Giroud has been involved in 25 goals since the start of last season, level with Manchester City’s Sergio Aguero.

Mesut Ozil has assisted only one goal in his last nine Premier League games.

David Nugent has not scored a Premier League goal since playing for Burnley in 2009-10. His last effort came in March 2010.

Leicester have scored at least once in each of their last 16 league games at home.

Arsenal have scored at least two goals in their last three Premier League away games.