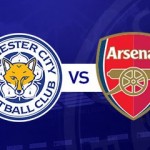 Arsenal are always a draw, and with Arsene Wenger’s men still reeling from their defeat by Chelsea they will have much to prove.

As for the Foxes? Leicester’s superb start to the season has put them up among the early contenders, and has been as thrilling as it is unexpected. They have trailed by two goals in both their last two games, but came away with a 3-2 win and a 2-2 draw. What will Claudio Ranieri’s next trick be?

Arsenal Closing In On A £11 million Deal For Ricky Alvarez