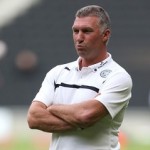 The last time Arsenal played Leicester City – on May 15, 2004 – they were completing the process of going an entire season unbeaten. Paul Dickov opened the scoring and Thierry Henry and Patrick Vieira responded for the Gunners.

A club short on striking options following a long-term injury to Olivier Giroud would give anything for a forward of Henry’s calibre now, and while they have been linked with an unlikely move for Falcao, Arsene Wenger’s options for this game are limited to Alexis Sanchez, who scored in midweek against Besiktas, and Yaya Sanogo, who has not scored a goal for the club yet.

Arsenal have looked rather unimpressive in the Premier League so far, requiring late goals to take four points from games against Crystal Palace and Everton, while Leicester also drew 2-2 with the Toffees in their first home game of the season and could give a debut to stellar new signing Esteban Cambiasso.