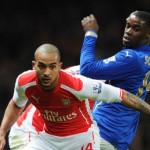 Claudio Ranieri will make several changes to his team. The City boss swapped 10 players against West Ham in the Capital One Cup in midweek but still saw his side progress, admitting that some of those who played in the third-round tie have given him food for thought ahead of the visit of the Gunners.

However, the likes of Kasper Schmeichel, Ritchie De Laet, Wes Morgan, Danny Drinkwater, Ngolo Kante, Riyad Mahrez and Jamie Vardy are all expected to return to the starting line up but on-loan winger Nathan Dyer (knee) remains out injured.

Arsenal will be without defensive midfielder Francis Coquelin because of a knee problem. Midfielder Santi Cazorla returns from a one-match suspension after his red card at Chelsea but defender Gabriel is out after accepting a charge of improper conduct at Stamford Bridge which saw him suspended for a match.

Jack Wilshere has had an operation on a hairline fracture in his left fibula, while forward Danny Welbeck and Czech midfielder Tomas Rosicky (both knee) are also sidelined.