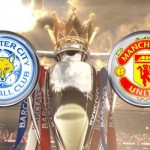 Jamie Vardy could break a Premier League record by scoring in an 11th consecutive game against the very team that the current holder, Ruud van Nistelrooy, set the benchmark for 12 years ago.

Louis van Gaal has described Vardy as a “nasty” problem for Manchester United and a “great” player but he will be just as wary of the threat posed by the in-form Riyad Mahrez.

United have the meanest defence in the top flight so a repeat of last season’s 5-3 win for Leicester would appear unlikely.