Gabby Agbonlahor fired a scrappy winner as Aston Villa moved up to second and continued their impressive early season form with a surprise 1-0 victory at Liverpool. 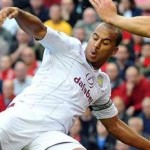 The 27-year-old forward, who signed a new four-year contract earlier in the week, reacted quickest to stab in from close range on nine minutes after Philippe Senderos’ knock down was not cleared by a static Reds defence.

The Swiss centre back was a constant menace to Brendan Rodgers’ men as they struggled to cope with set pieces throughout and he should have doubled the Villans’ tally when he somehow ballooned a free header over the bar from eight yards out.

The hosts had been hoping to build on a superb 3-0 triumph at Tottenham prior to the international break but struggled to carve out chances with Mario Balotelli starved of service on an uneventful home bow.

Adam Lallana, who was making his full debut for Liverpool, did go close with a rasping 25 yard drive while Philippe Coutinho hit the post late on, but in truth Villa were full value for their hard-fought win. Robbie Fowler Convinced Of Big Season Ahead For Liverpool