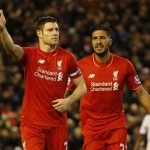 James Milner scored the only goal of the game from the penalty spot as Liverpool scraped to a home victory over Swansea City on Sunday afternoon.

Milner made no mistake from 12 yards after Swans defender Neil Taylor had been harshly adjudged to have handled Jordon Ibe’s cross, handing Jurgen Klopp’s side the three points just as fans inside Anfield were beginning to wonder if they would ever find a way to break the deadlock.

Liverpool dominated periods of the game but failed to turn that into clear-cut chances, and it always looked as if a set-piece might be their best chance of changing the game. As it was it turned out to be a day full of positives for the club – as the three points coincided with returns to first-team action for Jordan Henderson and Daniel Sturridge.