Adam Lallana struck a brace as Liverpool hammered Swansea City 4-1 at Anfield to secure their biggest win of the season and end a rollercoaster 2014 on a high. 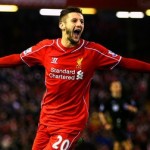 The Reds have endured some indifferent form in this campaign after going so close to the title last term, but they finish the year just five points adrift of the Champions League places thanks to a dominant display against the Swans.

Alberto Moreno gave the hosts a half-time lead with a close-range finish but it was in the second half when the game burst into life.

Lallana grabbed his first in somewhat fortunate circumstances when he charged down Lukasz Fabianski’s attempted clearance and saw the ricochet loop into the net.

Gylfi Sigurdsson replied immediately for the visitors but Lallana got his second soon after when he latched onto Philippe Coutinho’s delicious flick to race into the area and fire into the corner to net the goal of the night.

Jonjo Shelvey then capped a sorry evening for both himself and the away side when he headed Jordan Henderson’s corner into his own net. The former Liverpool midfielder had been lucky not to see red for throwing an arm in the face of Emre Can in the first half and endured another disappointing return to L4.

Liverpool could have added to their margin of victory with substitute Mario Balotelli and Raheem Sterling going close, while the latter could also have received his marching orders after clearly shoving Federico Fernandez in the face late on.

The result sees Brendan Rodgers’ side leapfrog Swansea into eighth spot and gives them real reason for optimism heading into 2015.