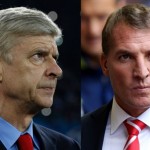 Brendan Rodgers: “All I know is that he (Sanchez) is a world class player. He was someone who would have been perfect for us. He is an intelligent player and he has great work rate. We know he will be a threat.”

Arsene Wenger: “We’ve won five of our last six games. Sunday is a good game for us to show that we can have continuity in finding a good balance between attacking well and defending well. Liverpool are always very strong at home and that’s why we want to continue to be faithful to our philosophy and play our game, but as well be solid defensively. Every defeat hurts. Every defeat is a scar in your heart forever. We have as well very good memories at Liverpool. We won many games at Liverpool as well. And even last year, we lost against them. A week later against the same team we won 2-0 at home in the FA Cup. Liverpool last year scored over 100 goals in the championship, they were very good going forward. This season they’ve scored 19 until now so they are not on the same trend offensively, but I must say they started out the blocks very strong and we were too late to get into the game. The match is between two top-four contenders, but Wenger is not yet looking to the end of the season. When you get over the hill to January, you look towards the end.”