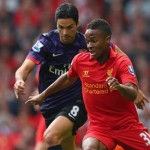 There have been four 90th minute or later goals in the last six Premier League meetings between Liverpool and Arsenal at Anfield.

Liverpool v Arsenal has seen more hat-tricks than any other fixture in Barclays Premier League history (5).

Last season’s 5-1 annihilation of the Gunners at Anfield ended a run of six home games without a win over the Gunners for the Reds (D3 L3).

Arsenal have trailed in six of the last seven Premier League games against Liverpool at Anfield and come back to win two and draw three of those six where they fell behind.

Mario Balotelli has had more shots (42 – inc. blocked) than any other player yet to score in the Premier League this season.

Only Sergio Aguero (17) has had an involvement (goals or assists) in more Premier League goals than Alexis Sanchez (14) this season.

After failing to score with his previous 38 shots this season in the Premier League (inc. blocked), Santi Cazorla has scored with three of his last seven in the competition.