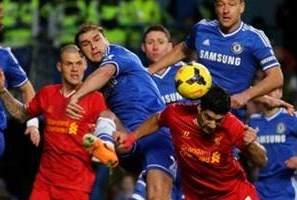 Jose Mourinho has won six and lost just one of his eight previous Barclays Premier League meetings with Liverpool (D1).

Liverpool are the only team yet to lose any points from a winning position at home this season.

Liverpool need four more goals to become the 30th instance of a top-flight team scoring 100 goals in a single season (and only the second since the 1960s).

Only four of the last 14 teams to score 100+ goals in a top-flight campaign have won the title.

Chelsea have lost only one of seven Premier League games played in between Champions League semi-final matches (and that was back in 2004); winning four and drawing two.