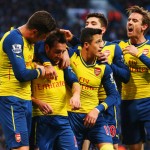 Arsenal entered one of their best performances of the season so far to shut out champions Manchester City and win 2-0 away.

Arsenal played superbly in the first half. They were compact and organised in the centre of defence, and rarely allowed City to create anything dangerous down the wings.

City were laborious and one-paced, and that allowed Arsenal to defend comfortably, and also to catch them on the back foot when Vincent Kompany tripped Nacho Monreal in the box. Santi Cazorla expertly dispatched the penalty to put Arsenal ahead.

In the second half, City pressed for an equaliser, but Arsenal had the pace to break on occasion.

This earned them a free kick from which Cazorla was able to cross for Olivier Giroud to head past a static Joe Hart. City tried to exert more pressure, but Arsenal were, incredibly, calm and confident in defence, and were by far the superior side. City have allowed Chelsea to pull away from them again.

Sol Campbell Back In Action With Arsenal Reserves