Manchester City cut the gap on Manchester United in third place to one point with a 2-0 win against West Ham United. 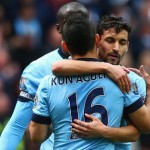 City took the lead with just under 20 minutes on the clock when James Collins turned Jesus Navas’s cross into his own net.

Sergio Aguero doubled the scoreline in style, leading a City break and finishing through Adrian’s legs after a quick exchange with Jesus Navas. West Ham offered very little and mainly resorted to playing it long to striker Carlton Cole, in for the injured Diafra Sahko.

The second half was marred by a nasty Cheikhou Kouyate elbow on David Silva that left the Spaniard needing to be stretchered off with a suspected broken cheekbone.

The injury took much of the intent out of the game and West Ham didn’t create a clear-cut chance until the 88th minute when Enner Valencia nearly found Kevin Nolan in the box.

The result marks a much-needed win after a tumultuous few weeks for City. With five games left in the season, the result puts them in a strong position to finish in the top four, seven points clear of Liverpool. Mario Balotelli On The Verge Of Joining Manchester City