Manchester City missed the chance to close the gap on Chelsea at the top of the Premier League as Burnley came from two goals down to claim a point at the Etihad. 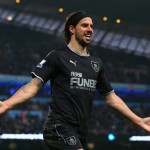 The champions appeared to be cruising at half-time as Fernandinho added a screamer to David Silva’s well-worked opener.

However, Burnley came out for the second half with a belief they seldom showed in the first 45 minutes and pulled one back within two minutes of the restart as George Boyd poked home from an offside position.

City boss Manuel Pellegrini will not be happy when he sees the replays of the goal, and his side were knocked off their stride as the visitors began to take the game to them.

And, while City created chances to kill the game off, it was no surprise when Burnley got their equaliser. The hosts failed to clear a Kieran Trippier free kick and after the ball bounced off Boyd, Ashley Barnes lashed it into the far top corner.

Pellegrini sent on Scott Sinclair late on but the visitors were able to see out the game and claim a vital point that takes them level on points with Hull and Crystal Palace above them.

Sergio Aguero : I Am Very Happy At Manchester City

Carlos Tevez : I Have Been A Professional All The Time!