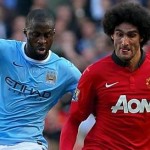 Yaya Toure has scored in three of his last four Premier League appearances against Man Utd.

Wayne Rooney has scored four goals in his last five Premier League appearances at the Etihad Stadium, including three in his last two games there.

Man City have won the last three Manchester derbies in the Premier League. They have not won four in a row in the league since December 1970.

Despite being only nine games in to the Premier League season, David De Gea is the only Man Utd player to have appeared in all nine matches so far this season.

Since the beginning of last season, Edin Dzeko is the only Premier League player to have scored at least four goals with his head, his left foot and his right foot.

Manchester United have made their worst start to a Premier League season, gaining just 13 points from their opening nine games. Last season under David Moyes, they had 14 points. Adnan Januzaj Handed The Coveted No.11 Shirt At Man Utd