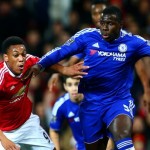 Louis van Gaal failed to pull off the victory that could save his job as Manchester United were held 0-0 at home in their Premier League clash against Chelsea.

In what could have been Louis van Gaal’s last game in charge of Manchester United, he set out his players in their correct positions, and choose his best 11 eleven players available, in what may have been a first for him in his time at Old Trafford.

Wayne Rooney was recalled to the starting line-up after being dropped to the bench against Stoke City. United hit the bar twice in the opening stages, and were denied two compelling penalty appeals.

Guus Hiddink was looking for his first win as the new Chelsea manager, and Nemanja Matic wasted a fantastic one-on-one chance minutes after Ander Herrera had a shot saved from two yards out. In injury time, Rooney should have seen red for an awful tackle on Oscar but was merely given a yellow.

A draw is an awkward result for United and Van Gaal. It is clear that they will part ways sooner than later, but they were the more impressive side. Ed Woodward has a difficult decision to handle.