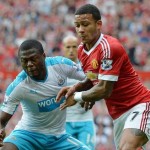 Manchester United dominated the early stages of the match, when Newcastle’s defence was disarray. Although he faded, Memphis threatened initially, and then drifted from the game.

Memphis shot straight at Tim Krul after skinning his full-back, and minutes later Juan Mata drilled a shot at the near post which was beaten away. Aleksandar Mitrovic then headed against the crossbar, and just before half-time Ayoze Perez dragged a shot just wide.

In the second half, Manchester United struggled throughout to break Newcastle down, who sat back and absorbed pressure comfortably.

Their best chances came when Luke Shaw drilled a shot at goal after a one-two with Morgan Schneiderlin, and Javier Hernandez had a one-on-one chance, but Krul saved on both occasions.