Dusan Tadic came off the bench to score the only goal of the game as Southampton frustrated, shut out and ultimately deflated Manchester United as they recorded a momentous 1-0 win – the first time they have won in the Premier League at Old Trafford. 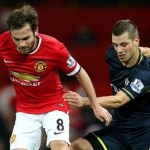 With United struggling to apply any pressure to a watertight visiting defence, Serbia’s Tadic – who replaced Eljero Elia after being spotted in the technical area without his shirt or shin pads on – was coolness personIfied as he stroked the ball into the gaping net after Graziano Pelle’s shot had come back off a post.

It was no more than he deserved having cut United open with the pass that provided Pelle with his chance. He was booked after converting from the rebound, but that will mean little to Southampton manager Ronald Koeman, whose side are two points clear of Manchester United in third place.

United’s unbeaten run is halted at 10, but they can have few complaints about losing this one with Juan Mata squandering two obvious chances to rescue a point from a match in which United were largely silenced by the Premier League’s best defence.

United’s starting line-up was worth £274 million, but they did not manage one shot on goal throughout an eminently forgettable afternoon.