Aston Villa’s relegation from the Premier League was confirmed with a 1-0 defeat to Manchester United at Old Trafford. 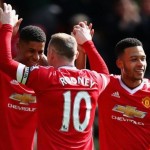 Marcus Rashford’s seventh goal for United in all competitions was enough to seal the three points for Louis van Gaal’s side and keep them in the hunt for a Champions League place, although Villa did provide a late scare when substitute Rudy Gestede hit the post.

Villa started the game slowly and United – who welcomed back Wayne Rooney – could have been 3-0 up by the time Antonio Valencia picked out Rashford to open the scoring on 32 minutes.

Rashford went closest to adding to United’s lead when he hit the side-netting in the second half, but both Rooney – who looked understandably off the pace – and Rashford were taken off before United had the result wrapped up.

Memphis Depay had a one-on-one effort saved by Guzan and Juan Mata could have scored twice when left unmarked from corners, but it was Villa who went closest to find the second goal of the game, with substitute Gestede hitting the post and having an effort cleared off the line.