Manchester United dropped out of the top four with a shocking 2-1 home defeat to Norwich which piled pressure on Louis van Gaal. 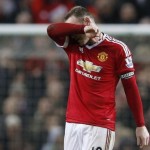 Wayne Rooney returned for Manchester United against Norwich, making his 500th appearance for the club, with Bobby Charlton making a presentation before the match.

Norwich City started in 18th place and United in fourth, but it was Norwich who took the lead through Cameron Jerome after more calamitous United defending.

Jose Mourinho has been in touch with United with a view to taking over at Old Trafford, and such a poor showing in the first half only served to increase the pressure on Van Gaal.

Alexander Tettey’s goal barely changed the mood of the crowd, who had already lost faith. And the boos continued from the end of the first half. Anthony Martial pulled a goal back but few seemed convinced that a comeback was a possibility.

United have now gone six matches without victory, and Norwich are undefeated in three games. Van Gaal is on the edge