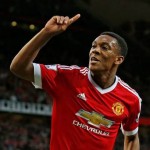 Anthony Martial scored with his first ever shot in the Premier League.

There was 1m 56s between Benteke’s goal and Martial’s in this match.

Christian Benteke has scored in his last three Premier League appearances against Manchester United, but has lost two and drawn one of these three games.