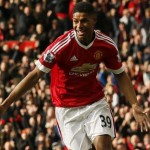 29’ GOAL! What a beautifully taken goal from young Rashford! Walcott was dispossessed and a cross from Varela bounced past Gabriel, allowing Rashford to lash that home.

32’ GOAL! I was just picking out some more tweets enthusing about Rashford, and he goes and scores again! Nice little ball dinked in by Lingard and Rashford nods that home!

40’ GOAL! Free kick swung in by Ozil, which pings off Welbeck’s head, despite two men standing next to him attempting to move their heads in the general direction of the ball.

65’ GOAL! And another terrific goal, this time from Ander Herrera! Rashford holds the ball up well after a brave run into the box, and Herrera strikes – it takes a nasty deflection of Koscielny and nobody can do anything about that.

69’ GOAL! Arsenal aren’t quite out of it. Great ball in bounces around for ages before Ozil mishits it into the ground – it bounces then into the net.

74’ MIME! This is getting ridiculous now, Louis van Gaal is berating the fourth official for what he perceives to be Arsenal playacting, and throws himself dramatically to the floor to illustrate exactly what he means.