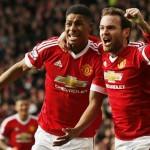 The 18-year-old from Manchester netted twice inside the first 32 minutes of the match to stun Arsene Wenger’s side, who were hoping to close the gap on leaders Leicester City.

Danny Welbeck reduced the deficit against his former club before half-time, but Ander Herrera’s deflected strike ensured United took all three points despite Mesut Ozil grabbing a second for the visitors.

Rashford’s memorable Premier League debut ended with a standing ovation after 80 minutes on a day Arsenal will want to quickly forget.