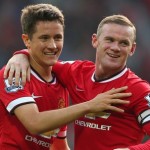 For the first time in Premier League history Manchester United field two players from Argentina in their starting XI, with Rojo and Di Maria.

Angel Di Maria is the 31st player from Argentina to score in the Premier League.

QPR have failed to score in their last five away matches in the PL.

The Hoops have not kept a clean sheet against United since September 1992, when they drew 0-0 at Old Trafford in the first ever Premier League meeting between the clubs.

Harry Redknapp’s side have won only one of their last eight away games, at already-relegated Barnsley on the final day of last season’s Championship.

QPR have failed to beat Man United in their last 16 league and cup encounters. The Red Devils have won 13 of them.

As a visiting manager, Redknapp has now lost 15 times in 15 trips to Old Trafford in the Premier League.