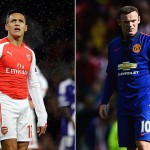 Manchester United forward Anthony Martial is a doubt for Sunday’s Barclays Premier League home clash with Arsenal, in which goalkeeper David de Gea is expected to make his return to action.

Martial (hamstring) was injured in the warm-up to Thursday’s Europa League last 32 second leg clash with Midtjylland – a week on from the same thing happening to De Gea (knee) ahead of the first leg.

It remains to be seen whether two other recent addition to United’s lengthy injury list, defenders Chris Smalling (shoulder) and Cameron Borthwick-Jackson (unspecified), are able to make their comebacks, while the likes of Antonio Valencia (foot) and Adnan Januzaj (hamstring) are nearing readiness.

Alex Oxlade-Chamberlain has been ruled out of Arsenal’s Barclays Premier League clash at Manchester United with a knee problem.

The England winger picked up the injury in the Champions League defeat to Barcelona and will miss Sunday’s trip to Old Trafford with boss Arsene Wenger uncertain of when he will be back.

Defender Gabriel will undergo a fitness test ahead of the game as he looks to return from a hamstring problem, while Jack Wilshere (leg), Santi Cazorla (knee) and Tomas Rosicky (thigh) are all still missing.