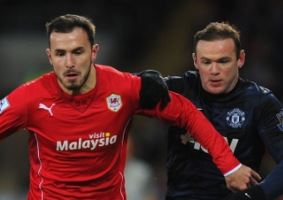 Juan Mata is set to make his Manchester United debut against Cardiff at Old Trafford. The club record £37.1million new arrival could be joined by Robin van Persie and Wayne Rooney, who are back training again after recent thigh and groin problems. Marouane Fellaini has also recovered from a broken wrist as United look to claw their way back up the Premier League table after suffering their seventh defeat of the season at Chelsea.

Cardiff manager Ole Gunnar Solskjaer reports no new injuries other than a couple of minor unspecified knocks. Defenders Andrew Taylor and Matthew Connolly remain in the sidelines with ankle problems and midfielder Don Cowie has a calf strain. The Bluebirds are poised to announce the new signings of Fabio from United and Kenwyne Jones from Stoke but neither are likely to play.