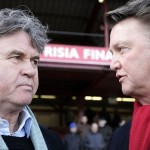 United boss Louis van Gaal: “[On how long he has left in his post] That’s the question. That’s always the question. It’s another situation because we have lost the fourth job in a row. I feel the support of everyone… It is not always like that, that the club has to fire or sack me. Sometimes I do it by myself. I am the one who wants to speak first with the board of Manchester United and my staff and players and not with you.”

Chelsea caretaker Guus Hiddink: “Every Chelsea versus Manchester United game is big but this one is especially of course. I hope we can show the same ambition there that we showed in a big part of this game [the Boxing Day draw against Watford].”