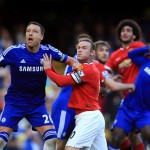 The last three fixtures between these two sides at Old Trafford in the Premier League have produced just three goals in total.

Chelsea have inflicted more defeats over Manchester United in the Premier League than any other club (16).

The Blues are unbeaten in their last five Premier League meetings with Man Utd (W3 D2).

There have been five red cards in the last six Premier League meetings between these two sides – three to Chelsea, two to Man Utd.

Man Utd have lost four competitive matches in a row within a single season for the first time since October-November 1961.

Guus Hiddink has won his last three competitive meetings with Louis van Gaal; all with PSV against AZ Alkmaar in the Netherlands in 2005-06.