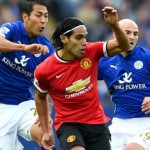 There have been just five goals in the last four Premier League games involving Man Utd.

Juan Mata has scored five goals from just seven shots on target in the league this season.

The Foxes had netted just one goal in their previous eight Premier League matches against Manchester United before their 5-3 win earlier this season.

Only Chelsea (19%) have scored with a higher percentage of their shots than Man Utd (17%).

For the first time in their 853-game PL history, Man Utd threw away a two goal lead to lose when the Foxes beat them 5-3 in September.

Leicester scored with all five of their shots on target in their 5-3 win over the Red Devils.

Wes Morgan has blocked more shots than any other Premier League player this season (28).

Only Crystal Palace (299) have committed more fouls than Leicester City (285) this season.