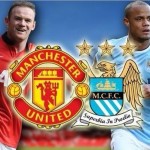 Manchester United winger Ashley Young has returned to training after a calf injury, but is not fit enough to play in the derby at Old Trafford on Sunday. Unlike his opposite number Manuel Pellegrini, United manager Louis van Gaal has few injury problems ahead of the 170th meeting between the two sides. Other than Young, only defenders Paddy McNair (liver) and Luke Shaw (leg) are out.

Manchester City manager Manuel Pellegrini has again offered no guarantees that fit-again captain Vincent Kompany will return for Sunday’s derby against Manchester United. The defender has been a substitute for the two City games since he played for Belgium against Pellegrini’s wishes during the recent international break. City are also still without Sergio Aguero, David Silva, Samir Nasri, Gael Clichy and Fabian Delph due to injuries.