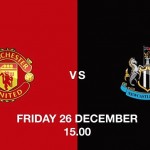 Liverpool proved what can be achieved with a devastating attack and an absence of European commitments last season, but surely Chelsea or Manchester City will be too strong in 2014/15. Boss Louis van Gaal clearly fancies a title sho though – speaking of his frustration at the 1-1 draw with Aston Villa and the impact it could have on his sides’ title hopes.

United are 10 points adrift of Chelsea at the Premier League summit, making their match against Newcastle a must-win.

Sneijder : Its Impossible To Turn Down Manchester United!