Out of the FA Cup and with Champions League qualification hanging in the balance, Manchester United’s season reaches a pivotal stage in the Premier League on Sunday at home to Tottenham Hotspur. 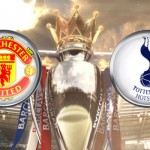 United were knocked out of the Cup by Arsenal in the quarter-finals on Monday, a result which effectively ended their hopes of major silverware for the second season in a row.

Finishing in the top four and qualifying for Europe’s top tier competition is now considered essential but United’s 10-game run-in to the end of the season also includes matches against Liverpool, Manchester City, Chelsea and Arsenal.

Fourth-placed United, who have 53 points from 28 matches, hold a slender two-point advantage over resurgent Liverpool, while Spurs are a further point back in sixth.

Tottenham have won at Old Trafford in the last two seasons having not previously tasted victory there since 1989 and they are unbeaten against United in their last five meetings.

The Manchester side can ill-afford another loss to Mauricio Pochettino’s team but, after defeat by Arsenal exposed their much-discussed flaws, manager Louis van Gaal knows his side must recover quickly with a top-four finish at stake.