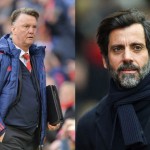 Louis van Gaal: “Youngsters often play well in the first match. The second is different. Marcus played well in both so he is a special talent. He could be a very positive surprise for Manchester United.”

Quique Sanchez Flores: “I usually don’t plan for more than one match but we are playing three very tough matches in seven days. Two of those teams, Bournemouth and Leicester, are amazing physically. And against Manchester United at Old Trafford I know the effort of the players will have to be really big. So the most important thing is to be fresh for the match. Maybe we will change players.”