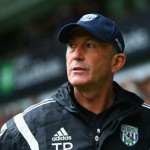 Louis van Gaal on United’s support: “It’s very difficult to play for Manchester United with a lot of pressure and you can taste that in Old Trafford because of all the yelling, so it’s better to whistle the manager, I can cope with it. Criticism from the fans is never unfair, and you cannot criticise the feeling of the fans. I think we have to play for the fans. I can only advise the fans to criticise the manager and not the players. I have had a lot of experience in my life as a manager.”

Tony Pulis on his FA fine: “On the fine, Greg Dyke has been a fantastic advocate for transparency in FIFA and UEFA. I’ll be writing him a letter and asking him where my £8,000 is going to go. If it’s going to a charity, which I hope it is because the FA are a non-profit organisation, I’d like to send it up to the Donna Louise hospice in Stoke-on-Trent. And I’d like transparency on that so everyone can see where my money is going. “Let’s be fair, there are enormous amounts of money being taken by the FA now in respect of managers being fined, and I think I have the right to know where it’s going. It’s my money not the FA’s money.”