Newcastle manager Alan Pardew’s decision to introduce Cisse for Remy Cabella at half-time proved inspired as two opportunist finishes on 57 and 78 minutes condemned Jose Mourinho’s side to their first defeat of the campaign. 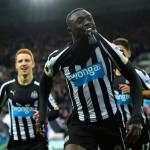 Newcastle had to see out 10 minutes of normal and six minutes of stoppage time with 10 men after Steven Tayor collected a second yellow card for a late challenge on visiting substitute Andre Schurrle.

Chelsea sub Didier Drogba had headed home on 83 minutes to give his side hope of rescuing a point, but Newcastle held on for a famous win that denied Chelsea the chance to move nine points clear at the summit.

Newcastle also had to complete the job with their third goalkeeper Jak Alnwick, who made his full debut at half-time after an injury to Rob Elliot.

But like so many men in black and white, Alnwick was in inspired form for his team as Newcastle held on to end Chelsea’s record-equalling 23-game unbeaten run.

Manchester City can close the gap to only three points at the top if they complete a home win over Everton later in the afternoon.