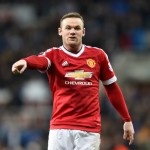 9′ – GOAL! NEWCASTLE UTD 0-1 MAN UTD. Wayne Rooney coolly fires the penalty to the left of Elliot with the keeper diving the opposite way. A spot-kick that will split opinion after Fellaini’s header was blocked at the corner by the arm of Mbemba.

28′ – NEWCASTLE UTD CHANCE! Great save! De Gea blocks with his left leg but Wijnaldum should have scored after Perez put it on a plate for him eight yards out.

32′ – PENALTY SHOUT! Janmaat bursts on to a loose ball on the right of the Man United area and goes down under a challenge from Lingard. It was clumsy and looked like it should have been a penalty. Newcastle feeling frustrated so far by the big decisions.

38′ – GOAL! NEWCASTLE UTD 0-2 MAN UTD. The visitors double their lead. A superb counter attack ends with Lingard slotting a lovely finish through the keeper’s legs after a sublime reverse pass from Rooney found him on the overlap.

42′ – GOAL! NEWCASTLE UTD 1-2 MAN UTD. Newcastle pull one back! Mitrovic nods a high ball down for Wijnaldum who arrives on cue to cushion a volley beyond De Gea. Great finish.

56′ – MAN UTD CHANCE! Martial rampages into the right-side of the area and feeds Herrera who lays it on for Lingard, but the youngster blazes a glorious chance to restore the two-goal cushion over the bar.

67′ – GOAL! NEWCASTLE UTD 2-2 MAN UTD. It’s 2-2! Newcastle come from two down to level as Mitrovic rolls home the spot kick after the forward was wrestled to the floor by Smalling at a corner.

79′ – GOAL! NEWCASTLE UTD 2-3 MAN UTD. The Red Devils regain the lead! Rooney crashes in his second of the match with a magnificent 20 yard drive into the far corner after Depay’s shot deflected into his path.

85′ – MAN UTD CHANCE! Superb stop! Elliot does well to deny Fellaini from close range. That should have sealed the match.

90′ – GOAL! NEWCASTLE UTD 3-3 MAN UTD. Newcastle are level!!!! It’s 3-3. Sensational stuff. Man United fail to clear their lines and when the ball falls to Paul Dummett the full back sizzles a shot via a deflection off Smalling into the top corner.

David de Gea On The Verge Of Joining Manchester United