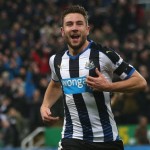 Manchester United twice let a commanding position slip as Newcastle’s Paul Dummett struck in the last minute to secure a dramatic 3-3 draw in one of the games of the season.

The Red Devils looked in control when the revitalised Wayne Rooney converted a hotly-debated penalty before teeing up Jesse Lingard to double the advantage as the visitors produced one of their finest attacking displays under Louis Van Gaal.

But Newcastle hit back through Georginio Wijnaldum and Aleksandar Mitrovic’s spot-kick to set up a barnstorming finale.

Rooney rifled in his second of the contest 11 minutes from the end to restore Man United’s lead, but the Magpies never gave up and brought an end to a four-match losing streak when Dummett hammered a deflected effort into the top corner at the death.

The match was full of incident with a number of controversial moments, but despite feeling aggrieved by some of Mike Dean’s decisions, Newcastle will be delighted with a share of the spoils after Lingard and Marouane Fellaini both missed gilt-edged second-half chances to clinch the game.

The result means Man United slip to sixth after West Ham’s win at Bournemouth while Newcastle are now just a point behind 17th-placed Swansea City.