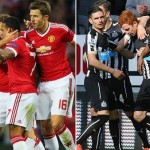 Newcastle have a stunning 12 injuries in their squad, though hopes are high that Fabricio Coloccini and Jack Colback will both be fit for Tuesday’s match. Skipper Fabricio Coloccini is struggling with a hamstring problem, as are fellow defender Kevin Mbabu (thigh) and midfielder Florian Thauvin (ankle), although midfielder Colback (also hamstring) has returned to training. Winger Rolando Aarons (foot) and striker Emmanuel Riviere (knee) are back in contention and defender Steven Taylor (also hamstring) and striker Papiss Cisse (groin) are also close to returns, but keeper Tim Krul (knee ligaments), defender Massadio Haidara (knee) and midfielders Gabriel Obertan and Vurnon Anita (both hamstring) remain on the sidelines.

Manchester United’s Bastian Schweinsteiger will not be fit to face Newcastle, the latest in a long string of injuries for United that has six players out. Phil Jones, Marcos Rojo and Antonio Valencia are also among those ruled out. Ashley Young, Michael Carrick and Morgan Schneiderlin are likely to return to the squad after being rested for the 1-0 win over the Blades.