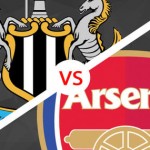 Olivier Giroud has scored eight goals in six Premier League apps against Newcastle United; more than versus any other team.

The Frenchman has netted five headed goals against the Magpies from just five headers on target attempted.

The Gunners are unbeaten in the last nine Premier League games against Newcastle (W7 D2), winning the last seven in a row.

Newcastle have won none of their last eight Premier League home games against the Gunners (D4 L4).

Newcastle have won just three of the last 28 Premier League meetings with Arsenal, though the Gunners had a player sent off on each of these three occasions.

Arsenal have taken 19 points from the last 21 available on the road in the Premier League.

Arsene Wenger and Steve McClaren have met 10 times as opposition coaches in the Premier League with the Englishman winning one to the Frenchman’s nine victories.

The Gunners have failed to score in five of their last nine PL games – this after only firing a blank in one of their previous 25 games in the competition.

Arsenal have scored the joint fewest goals (2) despite having the joint most shots (40, excl. blocked), meaning that they have a league-low shot conversion rate of 5%.