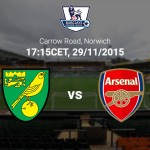 Arsene Wenger is ready to play Alexis Sanchez despite a minor hamstring complaint when Arsenal visit Norwich on Super Sunday.

Last weekend’s 2-1 defeat by West Brom ended a six-match unbeaten league run for the Gunners, although they returned to winning ways in midweek with a comfortable 3-0 victory over Dinamo Zagreb in the Champions League.

Sanchez scored twice and played 90 minutes at the Emirates Stadium, but suffered a tight hamstring late on that initially put his availability to play this weekend in question.

Alex Neil’s Norwich have just one win in their last eight in all competitions, and hover precariously three points above the relegation zone.

The visit of Arsenal marks the start of a tough run for the Canaries, as they face Everton at Carrow Road and trips to Old Trafford, White Hart Lane and Vicarage Road before New Year’s Day.