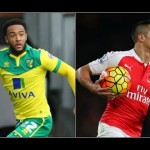 Norwich will be without midfielder Alex Tettey (groin) for Sunday’s visit of Arsenal. Captain Russell Martin is back in contention having been a late withdrawal from the squad at Chelsea because of personal reasons. Forward Kyle Lafferty has shaken off a minor groin problem picked up playing for the under-21 side in midweek, but winger Matt Jarvis, on loan from West Ham, remains sidelined with a knee injury.

Arsene Wenger is ready to play Alexis Sanchez in Arsenal’s Premier League clash at Norwich on Sunday. The Chile forward suffered a tightening in his hamstring after scoring twice in Tuesday’s Champions League victory over Dinamo Zagreb but is set to feature in East Anglia. Aaron Ramsey and Alex Oxlade-Chamberlain have both overcome their own hamstring complaints and could feature at Carrow Road but Jack Wilshere (leg), Mikel Arteta and Theo Walcott (both calf), Francis Coquelin, Danny Welbeck and Tomas Rosicky (all knee) are missing.