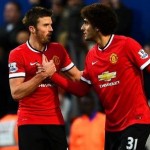 The first half was an indictment of both sides, as they betrayed their own particular weaknesses under their managers.

Harry Redknapp’s QPR were tactically rudimentary, and relied solely on the energy and skill of Charlie Austin, who went close with two volleys that David De Gea did well to save.

Van Gaal was forced into an early sub, swapping the injured Evans for Fellaini and switching to four at the back. Minutes later Rooney found Valencia on the right, and Fellaini lashed a volley into the top corner. United offered more threat as QPR chased the game, and James Wilson grabbed a second in the final minute.