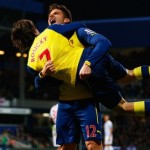 11’ CHANCE: Austin takes a shot from outside the box but it’s straight at Ospina. QPR are creating a lot of chances by playing long balls over the top and getting them down on the deck to try their luck.

31’ YELLOW: First yellow of the game and it’s little surprise that it’s Karl Henry. A shove in the back of Rosicky and Arsenal have a promising free-kick.

35’ INJURY: Not looking great for Gabriel. He’s tweaked his hamstring and is sitting with his legs outstretched on the pitch while the ball is out of play.

37’ CLOSE: Another good chance for QPR. Zamora heads it down to Austin, who takes it past Coquelin and unleashes a low shot past Ospina’s right post. He knows he should have hit the target.

40’ INJURY: Nasty collision between QPR teammates Caulker and Onuoha. Onuoha comes off the worst and the physio is on to take a look at his eye.

46’ CHANCE: Great early chance for Arsenal. Rosicky gets it in from the bye line and Ozil can’t make clean contact with the cross. Sanchez’s follow up shot is saved by Green. Corner to Arsenal.

64’ GOAL: QPR 0-1 Arsenal – Arsenal break and Sanchez slips in Gibbs with a reverse pass. The left back looks up and finds Giroud who finishes from close range.

69’ GOAL: QPR 0-2 Arsenal – Gibbs lays it off to Sanchez, who dinks inside the box and shoots past two defenders into the bottom corner beyond a helpless Rob Green.

81’ GOAL: QPR 1-2 ARSENAL – It’s that man Austin with a late goal for QPR. He pivots and hits a low strike into the bottom corner past Ospina. Nervy remaining 10 minutes for Arsenal now.

Arsene Wenger Insists Arsenal Not Giving Up On Luis Suarez