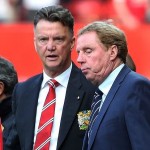 Louis van Gaal (Manchester United): “When you want to be champion you have to win matches against Southampton and Aston Villa.” Speculation has been rife Van Gaal could boost his squad by signing the likes of Kevin Strootman, Seamus Coleman and Mats Hummels this month. But Van Gaal played down talk of a January spending spree. ”I don’t think that we shall be very active as not many players of a certain level are available,” he said. ”When we buy a player he has to be better than the players that are playing now and that is a difficult job.”

Harry Redknapp (QPR): “I’ve got a great relationship with owner and the shareholders, but if they want to take a change of direction then that’s their decision. There’s nothing I can do about that, whatever they do they do. There’s no point losing sleep.”