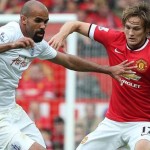 Queens Park Rangers have allowed more shots on target against them than any other team in the Premier League (118).

Manchester United have won 13 and lost none of the last 16 matches in all competitions against Queens Park Rangers.

The Red Devils are unbeaten in their last nine matches in all competitions against Rangers at Loftus Road (W6 D3).

QPR are the only team yet to score a goal in the opening 15 minutes of a Premier League game this season.

QPR have had more of their shots cleared off the goal-line than any other team in the Premier League this season (6).