Chelsea were frustrated by a determined Southampton as the two sides drew 1-1 at St Mary’s Stadium. 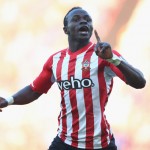 Southampton were the more impressive of the two sides, bolstered by an easing of their recent injury crisis. Victor Wanyama and Morgan Scheiderlin dominated the midfield, with Mane stretching play ahead of them.

It was Sadio Mane who scored first, running onto Dusan Tadic’s pass and finishing confidently past Thibaut Courtois. Chelsea struggled for rhythm, and it took a moment of excellence from Eden Hazard, who cut in from the right, beat three defenders and finish with a strike into the far corner, to bring them level.

In the second half, Chelsea built on the ending of the first half, and pinned Southampton back into their own half for much of the second period. Despite that, Chelsea created little opening, and Hazard came closest for Chelsea when he dragged a shot just wide of goal.

With 15 minutes of normal time remaining, Didier Drogba was introduced, and then Loic Remy. Morgan Schneiderlin received a second yellow for a foul on Cesc Fabregas, but there wasn’t enough time for Chelsea to build on the advantage.