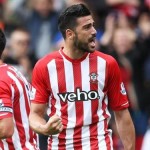 Neither side were able to keep control of the ball for sustained periods of time, resulting in slightly desperate defending throughout. A goal had appeared inevitable for both sides, and it was Southampton who took the lead.

A defensive mistake from Ryan Mason put Ben Davies under pressure, and Pelle stole in to poke the ball past Hugo Lloris in goal. The equaliser came when Eric Dier was afforded too much time on the right, and his cross was met by Lamela to steer in at the near post.

In the second half, Southampton went ahead when Shane Long curled in a first time cross for Pelle to thunder past Lloris, but Chadli had an equaliser when he held off Maya Yoshida to finish from a tight angle. Despite further chances for both side, neither side could find a winner.